The mysterious disappearance of Colonel Albert Fountain and his son Henry is one of the most intriguing stories to come out of Southern New Mexico during the tumultuous late 19th century. First, let's start off with a little back history on Colonel Fountain.

The text on a now defunct historical marker about Colonel Albert J. Fountain once read:

Albert Jennings Fountain was a Civil War veteran, New Mexico legislator and prominent lawyer. Colonel Fountain and his young son were presumed murdered near this spot while traveling between Lincoln and Las Cruces on February 1, 1896. Their bodies have never been found. Oliver Lee and James Gilliland were tried for their murder in 1898. Both were acquitted.

That marker has now been replaced with the current one that focuses on the murder mystery (more on that in a bit). 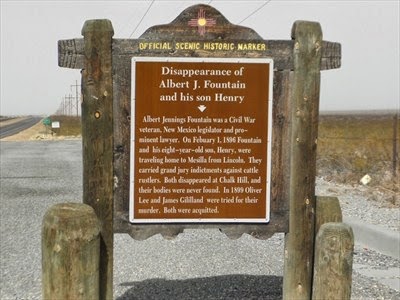 Albert Jennings Fountain was born in New York, and moved to El Paso, Texas after the Civil War. During the Civil War, he helped retake the New Mexico Territory for the Union. In El Paso, Fountain worked his way up to the Texas Senate. His right leaning Republican views didn't make him very popular in the area. Eventually he decided it was too dangerous to live in El Paso and moved back to his wife's hometown, Mesilla, New Mexico. In Mesilla, Fountain became a lawyer, and founded the Mesilla Valley Independent, a newspaper in Mesilla.

At the time, cattle rustling and rustler gangs were rampant in the area, particularly along the eastern and western slopes of the Organ Mountains, located approximately 10 miles to the east of Mesilla. 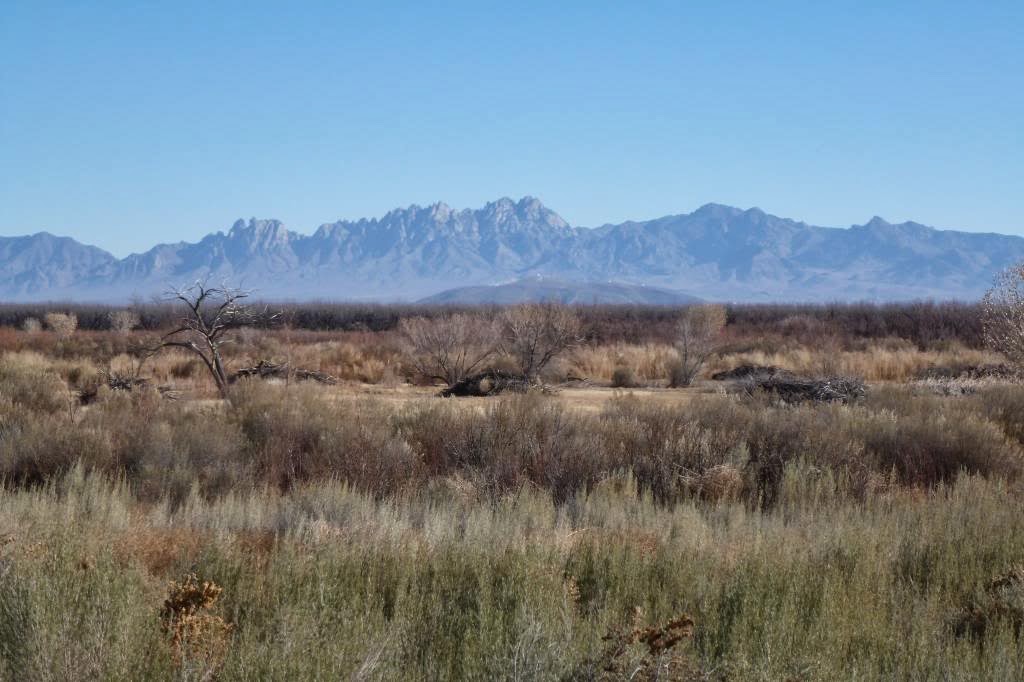 Fountain was involved in the prosecution of alleged cattle rustlers and local ranchers Oliver Lee and William McNew. The court hearings were taking place in Lincoln, site of the Grand Jury. Fountain made the trip in a horse drawn carriage along with his nine-year-old son, Henry.

On their return, it is said that there were men, three riders, like specters in the distance, that seemed to be awaiting something. Numerous passers by claimed to witness the men in the distance.

The rest is history. Fountain and his son were never seen again.

The next morning, an anxious Saturnino Barela, at the Chalk Hill crossing on his return trip to Las Cruces and Mesilla, discovered the tracks of Fountain’s waylaid buckboard.  He found the hoof prints of strange horses.  He saw no sign of the carriage, the horses, or Fountain and his son.  He rushed across San Augustine Pass and down the mountain slope to Fountain’s home in Mesilla to alert the family.
Two search parties, one of them led by Fountain’s son, rushed through the darkness of the icy night to the murder site.  Helped by two Mescalero Apache scouts, they began piecing together the evidence as the sun rose over the Sacramento Mountains, on the eastern horizon.  They found where a man had knelt and fired from behind a growth of shrubs, leaving shell casings on the ground.  They discovered the site where two men had tended three horses.  They followed wagon tracks and discovered a pool of blood.  One man discovered a blood-soaked handkerchief with a nickel and a dime tied carefully in its corner.  They followed the wagon tracks of the buckboard and the hoof tracks of six horses east for some 12 miles, into  sand dunes west of a small and isolated mountain range called the Jarillas.  There, they discovered the carriage, which had been plundered and abandoned.  They tried to follow the tracks of the killers.  One trail led toward one of Oliver Lee’s ranches, where trackers found a threatening reception
In the days to come, new posses joined the search, hoping the find the bodies of Fountain and his son.  Rumors swirled throughout the desert and across the country.  Newspapers covered the story in detail.  The governor of New Mexico offered a reward for the capture of the killers.  The Republican Party and the regional cattlemen mourned Fountain’s passing.
(quoted text taken verbatim from http://www.desertusa.com/mag06/mar/murder.html , written by Jay W. Sharp)

So all that was ever found was a blood-soaked handkerchief, some tracks, and tracker based evidence of a gunfight, or massacre.

The legacy of the Fountain family lives on. The Fountain Theater, founded in 1905, is New Mexico's oldest theater building and current home of the Mesilla Valley Film Society, of which my wife is a board member. The theater was begun by Albert Fountain Jr., who purchased the building and turned it into a theater. Murals inside the building painted in 1914 (or 1917, the history is unreliable) by Fountain Jr. depict Colonel Fountain's arrival in the Mesilla Valley.


I referred to the following websites for information on this article: